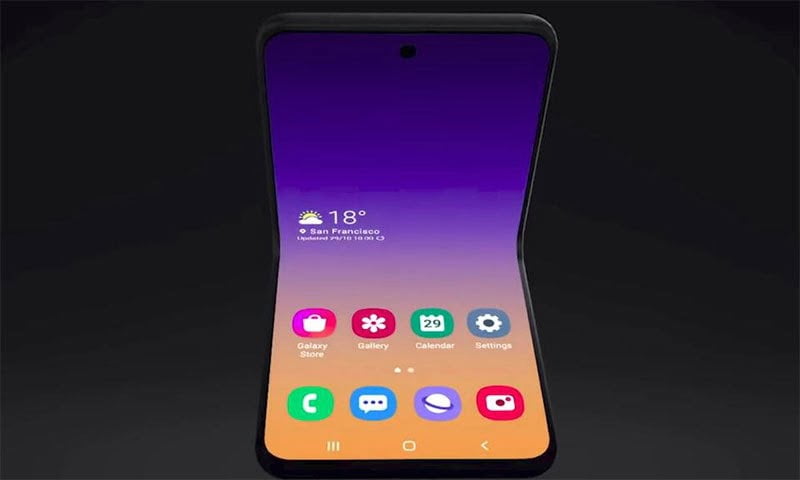 Samsung has teased a new foldable phone concept onstage at the company’s developer conference today. The new concept, which Samsung didn’t name, looks more like a traditional flip phone thanks to a foldable display that allows the device to fold in half

“This brand-new form factor that we’re now exploring will not only easily fit in your pocket, but it also changes the way you use your phone,” explained Hyesoon Jeong, head of Samsung’s framework R&D group, onstage at Samsung’s Developer Conference. The idea behind the concept is to take Samsung’s foldable smartphone technology and push it to “become more compact,” and extend to new device form factors

Samsung didn’t spend much time detailing the device, nor when the company plans to make this available. There was no mention of the hardware involved, and whether Samsung has improved its foldable display technology from last year

The company did use this mysterious device as a bridge to discuss an upcoming update to its One UI efforts with Android. “As a pioneer in the foldable category, we understand that every innovative form factor requires an equally innovative user experience,” explained Jeong

Samsung has been working on improving its Android user interface since it debuted the Galaxy Fold device earlier this year, and the company is now working on One UI 2. which looks like a more refined version of the changes the company introduced with the S10 and Note 10 this year

One UI 2 includes more glanceable information, better reachability for one-handed use, and “more vibrant hues” throughout the OS. Animated icons will be available too, and a full dark mode. Overall, it looks like minor but useful changes to the customisation Samsung offers today with its Android handsets

Software aside, this new clamshell / flip phone foldable hardware looks like the future of devices like Samsung’s Galaxy Fold. While the Fold started off life with a lot of screen issues, it’s clear Samsung isn’t ready to give up on foldable display technology. Samsung didn’t provide solid details today, but the company is teasing that the future of foldable phones might look like the popular Motorola Razr of the past