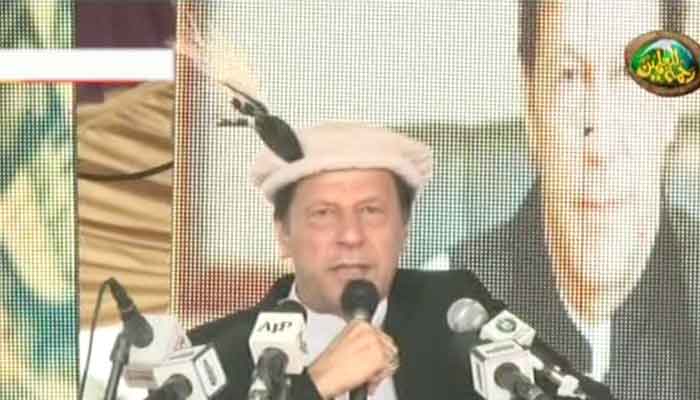 ISLAMABAD: Prime Minister Imran Khan on Friday lashed out at his political opponents who have gathered in Islamabad with their  thousands of supporters as part of their Azadi March led by Maulana Fazlur Rehman

"I will not give them NRO, come hell or high water,” said the prime minister while addressing a gathering in Gilgit-Baltistan

The prime minister, who had set up a seven-member  government committee to hold talks with opposition ahead of the march,  targeted    Pakistan Muslim League-Nawaz, Pakistan Peoples Party, Maulana Fazlur Rehman and Mehmood Khan Achakzai in his speech at a gathering

"And somebody Mehmood Khan Achakzai what is he doing in Azadi March,” he said of the Pashtoonkhwa Milli Awami Party (PPP)

Without naming anyone, he said two sons of  a former prime minister were involved in corruption of billion of rupees

"And when  they are questioned about their corruption, they say they are not Pakistani citizens,” said the prime minister

"And the flat which I had bought abroad, the Supreme Court  held me accountable for 10 months”

The prime minister said he has waged a struggle for 22  years but his opponents think he could be pressured into giving NRO, an acronym for National Reconciliation Ordinance and a term which he often uses to refer to political  compromises

"I will send you to jails ,” he said  , adding that his opponents  steal the money and park in foreign banks

" said the prime minister while addressing a gathering in Gilgit-Baltistan."I will not give them NROcome hell or high waterImran Khan on Friday lashed out at his political opponents who have gathered in Islamabad with their thousands of supporters as part of their Azadi March led by Maulana Fazlur RehmanPashtoonkhwa Milli Awami Party (PPP)PM Imran Khan said he won't give NROsays PM Imran as Azadi March continuesWon't give NRO come hell or high water
60
Share FacebookTwitterGoogle+ReddItWhatsAppPinterestEmail
You might also like More from author
تازہ خبریں