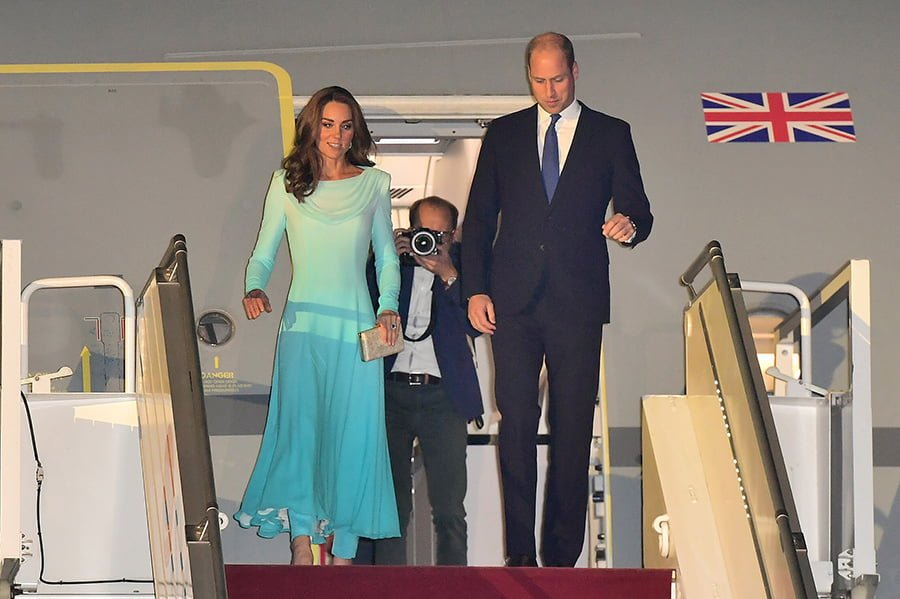 The Duke and Duchess of Cambridge landed at Rawalpindi’s Nur Khan Airbase to begin their royal tour of Pakistan. William and Kate, 37, were met by Pakistan foreign minister Shah Mehmood Qureshi and his wife as they disembarked from their RAF Voyager aircraft

A statement from Kensington Palace, ahead of the visit, said the couple “will get the chance to meet a range of people from Pakistan, including charity members, community leaders and young children.” The palace also said it will be “the most complex tour undertaken by The Duke and Duchess to date, given the logistical and security considerations

While their schedules are usually outlined beforehand, tight security around the tour means that William and Kate’s itinerary will be released day by day instead 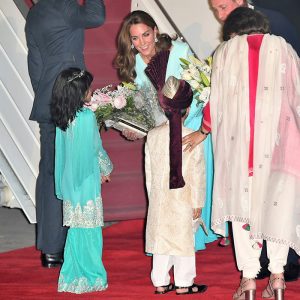 Kate looked stunning in a bespoke turquoise dress and trousers by British designer Catherine Walker, in the style of traditional dress – a shalwar kameez.

Kate teamed her dress with her nude Rupert Sanderson shoes and statement earrings, believed to be by Pakistant brand Zeen, while William wore a dark suit and blue tie.

Kate’s outfit appeared to be a nod to her host nation and Princess Diana, who was an avid fan of Catherine Walker’s designs

William and Kate are the first royals to visit Pakistan since the Prince of Wales and Duchess of Cornwall’s trip to the country in 2006. They are also following in the footsteps of William’s late mother Diana, Princess of Wales, who visited Pakistan in 1991  on her first solo tour and again in 1996 and 1997

The couple are travelling without their children Prince George, six, Princess Charlotte, four, and one-year-old Prince Louis, who have remained in London