More than 100 students have been injured in India after baton-wielding police charged at them and fired tear gas at two federally-run universities where students were holding anti-citizenship law protests.

In South Delhi on Sunday, residents joined the JMI students as they tried to march towards Parliament to protest the exclusion of Muslims from the citizenship law.

Clashes erupted after police tried to disperse the demonstrators as they reached the Sarai Julena area near the university campus, with buses and private vehicles set on fire.

The police then stormed the JMI and fired tear gas into some classrooms. Indian media reports said students praying at a mosque were also attacked.

Nearly 100 students were detained following the violence, although university authorities said the students did not take part in the burning of vehicles.

How to rescue a victim during a #lynching incident.
Real life demo by women students of #Jamia 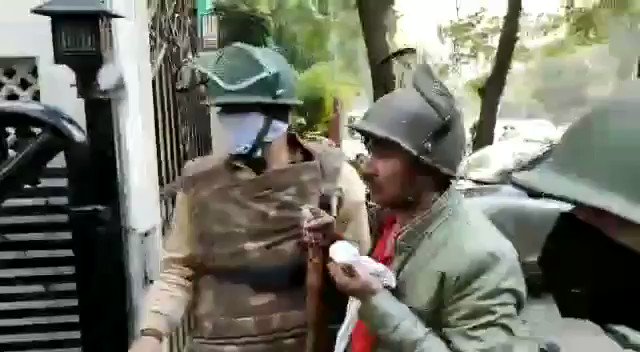 “The police have entered the campus by force, no permission was given,” said JMI’s Chief Proctor Waseem Ahmed. “Our staff and students are being beaten up and forced to leave the campus,” he told ANI news agency.

JMI Vice Chancellor Najma Akhtar also backed the students, saying she was “hurt by the way my students were treated”.

The detained students were released in the early hours of Monday after hundreds of activists and students from other New Delhi universities protested in front of the Delhi Police headquarters.

Solidarity protests were also reported from university campuses across the country in the wake of the police action.

Mohmmad Minhaj Uddin, a law student at the JMI, told Al Jazeera he sustained an injury to his eye after being beaten by the police. 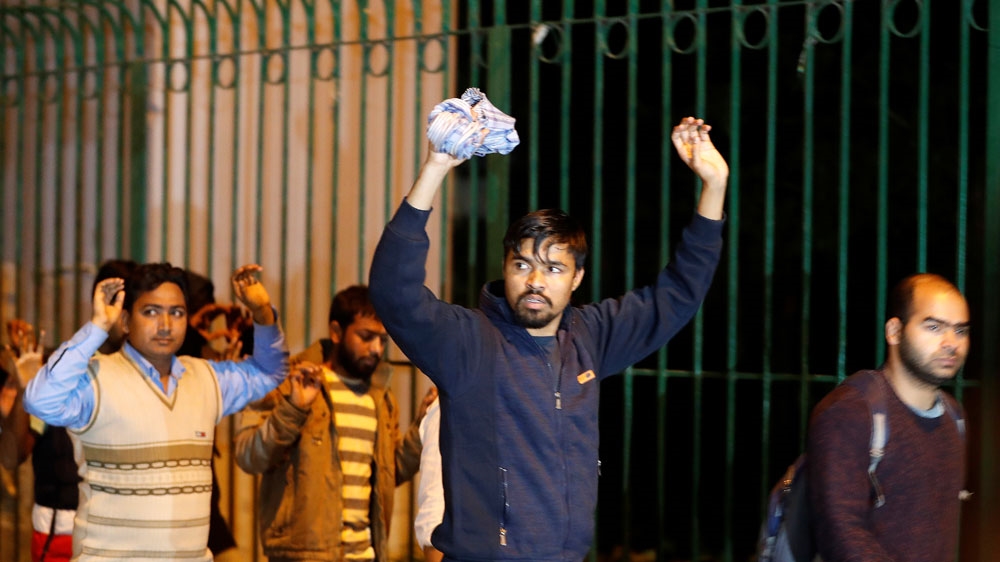 “I don’t know why I was beaten up. I wasn’t even protesting. I was in the university library when police entered the campus,” the 26-year-old told Al Jazeera.

“They broke the lock of the library gate and entered inside and beat everyone who came in their way,” he said. “In panic, I fell on to the ground. They hit me on the eye.”

Mohammad was rushed to al-Shifa Hospital in Jamia Nagar, where he received treatment.

Officials at al-Shifa and Holy Family hospitals said more than 100 people with injuries were brought in following the clashes.

Watch | “They entered our hostels… Is this democracy? What wrong did we do? We were simply protesting”: Student recounts police crackdown at #JamiaMillia university yesterday. #CitizenshipAct #DelhiProtests #Jamia 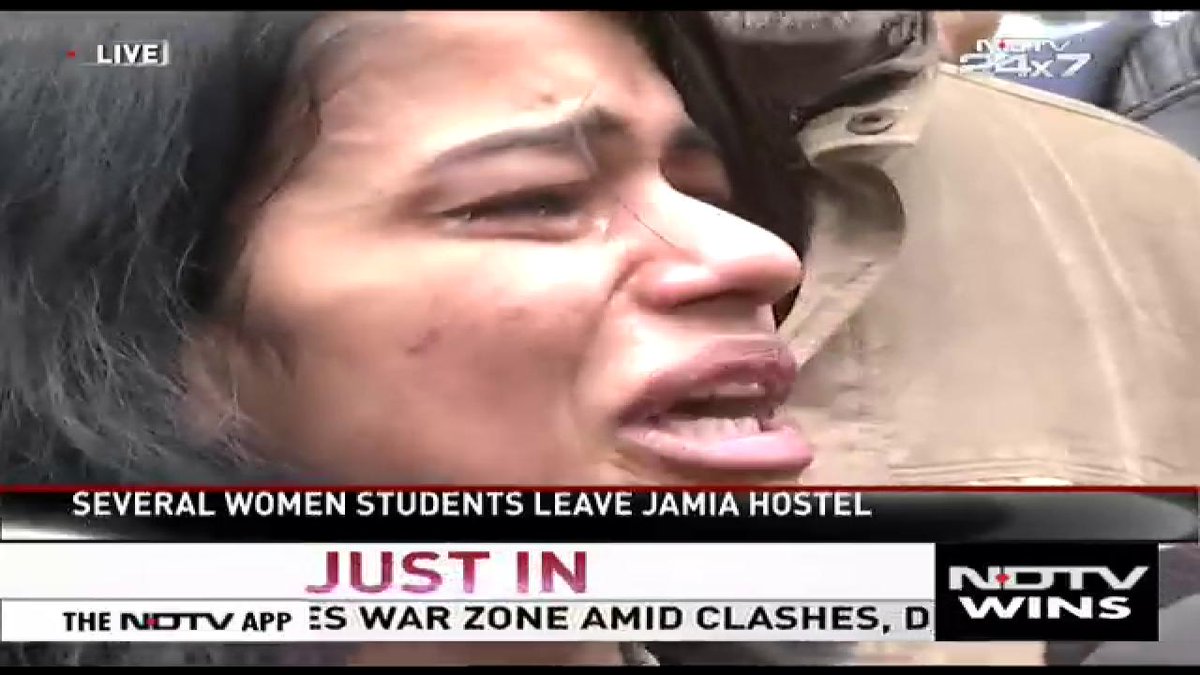 Delhi Police defended the police’s action. “About 4,000 people were protesting and police did what they did to disperse them when the crowd burned buses,” said Chinmoy Biswal, a senior police officer in the area. “If it had been a peaceful mob, it would have been dispersed peacefully.”

He added that police entered the campus to maintain order and that six officers were wounded in the clashes. 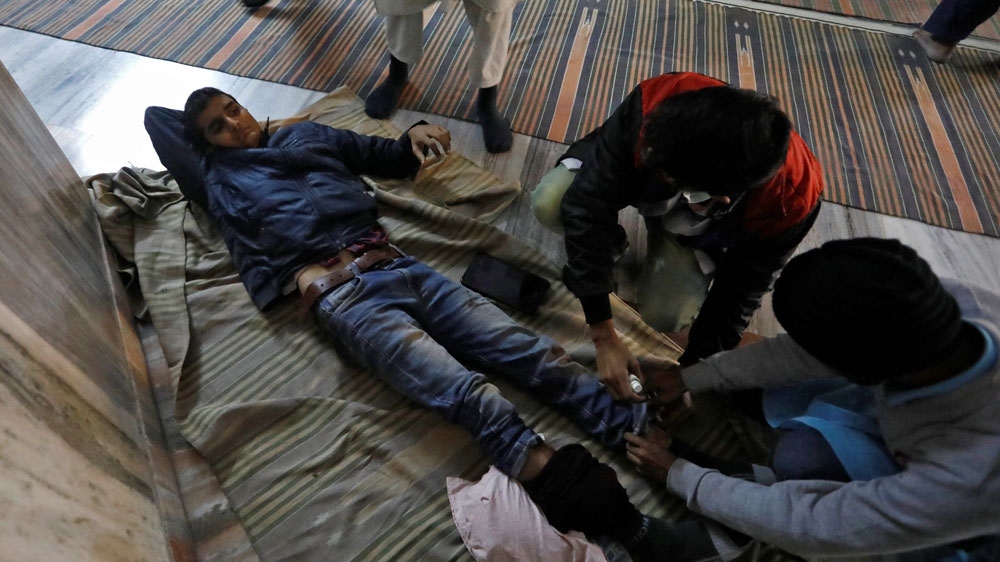 Local authorities ordered all the schools around the JMI in the capital to remain closed on Monday. JMI had already announced on Saturday that it was closing early for the winter break.

Similar scenes erupted at AMU campus, about 130km (about 81 miles) away from the capital in Uttar Pradesh state, where police used tear gas and attacked students with sticks.

Thousands of students at the AMU, India’s largest minority institution, had been protesting against the citizenship law at the main entrance of the university.

On Sunday, while they were gathered at the entrance, dozens of police officers entered the campus and attacked the students with batons, firing tear gas.

Media reports said Aligarh district authorities have ordered the closure of the university.

News from AMU, 6 am:
Many students missing, at least six names confirmed. At least 22 detained in Malkhan hospital (far from campus). Official notice to vacate campus in 24 hrs. Widespread panic and fear on campus, students very reluctant to talk

Modi, speaking at a rally in the eastern state of Jharkhand on Sunday, accused the opposition Congress party of inciting violence.

“Those who are spreading violence can be identified by their clothes,” he said.

The Congress party, in turn, slammed Modi’s Bharatiya Janata Party (BJP), saying the government “has failed at its duty to maintain peace in the nation”.

Sunday was the fifth straight day of protests in India against the citizenship law, with at least six people killed in the northeastern state of Assam.

People in the state, which has historically seen protests against undocumented Bangladeshi immigrants, fear the new law will encourage more immigrants to settle in the region.

Authorities have shut down the internet in several parts of the affected states in an attempt to maintain law and order. 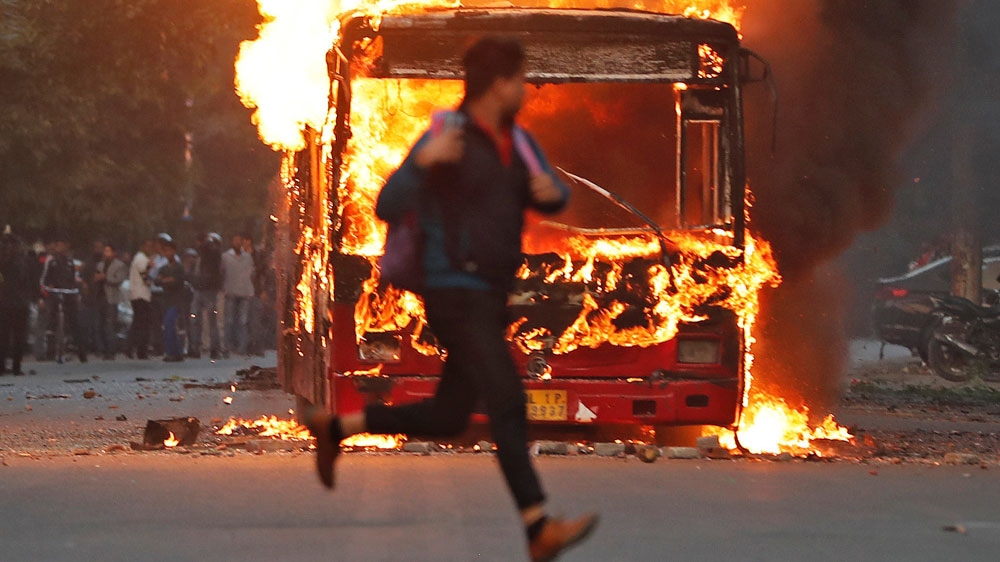